To share your memory on the wall of Zeelina Yusuf, sign in using one of the following options:

Zeelina endured several years of treatments for various ailments that were directly related to diabetes. Most recently, she experienced kidney failure and was on dialysis for the past few years. She fought this uphill battle valiantly. As her body and mind slowly lost to a war of attrition she still pushed on as best as she could.

Zeelina leaves behind her wonderful son, Adam, whom she was so incredibly proud of. She was the devoted and loving wife of the late Mohamed Hanif Yusuf (2006). She will be greatly missed by her parents Sultan and Bebe Nazmoon Alli, as well as her siblings Bebi Linnesa (Karim), Zahidally (Bertha), Farook (Nadira), Zureena, Mackhlouf and the late Fazir (2006). Zeelina will be lovingly remembered by many extended family members in Canada, the United States and Guyana.

Shortly after Zeelina and Mohamed arrived in Canada in the late 70’s she began working for Protection Products in Guelph. She was committed and worked hard there for 20 years, while also forming close friendships that endured until this very day. In the latter years she became a supervisor after obtaining a certificate in Industrial Engineering from Conestoga College. Looking for a career change in the early 2000’s, Zeelina then pursued further schooling in order to work as a PSW. She soon found employment at St. Joseph’s Health Centre in Guelph and stayed there until a few years ago when her health issues forced her to take leave from her position.

Zeelina brought so much love and kindness into this world and leaves with a piece of our hearts. She could be stubborn at times but she was also selfless, kind, compassionate, nonjudgmental and honest. Above all, she was a survivor. Despite past sorrows and the physical pain she felt in more recent years, Zeelina kept on fighting to be here every day for as long as she could. She also raised her son, Adam, to be a survivor and knew that when she left this world he would be able to continue to live his life in her absence. She has left us peacefully for the afterlife; there is no more suffering, no more pain, and no more reason for us to despair. Her love remains in this world and she has now found peace.

Zeelina’s family would like to sincerely thank all of the doctors, nurses, PSW’s and Social Workers who helped and showed kindness to her over the years.

In lieu of flowers, a donation to the Kidney Foundation of Canada or to Diabetes Canada in her name would be greatly appreciated by the family.
Read Less

To send flowers to the family or plant a tree in memory of Zeelina Yusuf, please visit our Heartfelt Sympathies Store.

Receive notifications about information and event scheduling for Zeelina

We have provided a digital copy (PDF) of the Memorial Program that we supply at the time of the service. To Download this file please click the filename below.

We encourage you to share your most beloved memories of Zeelina here, so that the family and other loved ones can always see it. You can upload cherished photographs, or share your favorite stories, and can even comment on those shared by others.

Posted Jul 27, 2020 at 07:00pm
I am so sorry to hear of the loss of Zeelina. I was fortunate enough to be able to work with her for a few years. She was a kind and compassionate woman. My sincere condolences to her family.
Comment Share
Share via:
LM

Posted Jul 23, 2020 at 10:43pm
Dearest Zeelina,
I can't believe you're gone. I have so many memories of you to cherish from the time I was a toddler living next door to you and Mohamed, to our most recent birthday lunch at Kelsey's just 1 month ago. Who knew that our relationship would grow from being neighbours to being such close friends. I have looked up to you like a second mother. I will miss our visits, our phone conversations and especially our outings together. I know you have struggled with your health these past few years but you still remained strong and rarely complained about the rough days. Your number one priority was always Adam and we spoke on more than a few occasions about how he would be able to go on after you passed one day. You have raised a smart, kind, loving, independent young man. I will always be there for him just as you have always been here for me.

Until we meet again. I Love You.

My condolences to Adam and family. Zeelina was a great family friend to us and will be dearly missed. She was one of the most compassionate and caring people I know. I have many fond memories of her and her family that I will always carry. Demetri 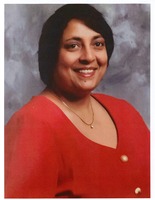